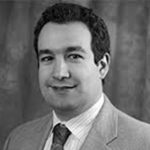 Dr. Rachid Baz is a board-certified hematologist and oncologist, currently Myeloma Section Head in the Department of Malignant Hematology at Moffitt Cancer Center. In addition, he is the Director of Clinical Research in the Malignant Hematology Department. Dr. Baz has developed a special expertise in managing patients with plasma cell disorders such as multiple myeloma, monoclonal gammopathy of undetermined significance (MGUS), plasmacytoma, primary systematic amyloidosis, and Waldenstrom’s macroglobulinemia (WM). He is a very active researcher in the field and is involved in a number of clinical trials as well as the Moffitt Myeloma Working Group (MMWG). His research focuses on malignant hematology and involves the development and implementation of biomarker-driven therapeutics into patient-based phase I and II clinical trials, including early-phase clinical trials in multiple myeloma. He is a frequent lecturer on myeloma for both medical and lay audiences. Among other awards, he was the recipient of the Junior Clinical Science Award at Moffitt, and the University of South Florida Outstanding Resident Teaching Award. He completed residency in internal medicine and hematology & medical oncology from Cleveland Clinic Foundation and graduated medical school from American University of Beirut.